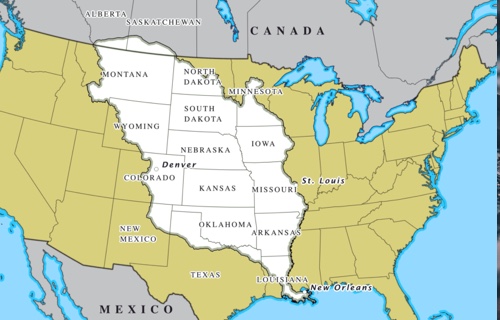 ‍The Haitian Revolution was a successful revolt by self-liberated slaves against colonial rule which led to Napoleon abandoning the project of establishing a French colonial empire in North America and France selling the Louisina Territory to the United States, effectively doubling the size of the US

The revolution was the only slave uprising that led to the founding of a state which was both free from slavery, and ruled by non-whites and former captives. It is now widely seen as a defining moment in the history of the Atlantic World.

Its effects on the institution of slavery were felt throughout the Americas. The end of French rule and the abolition of slavery in the former colony was followed by a successful defense of the freedoms they won, and, with the collaboration of free persons of color, their independence from white Europeans.

The revolt began on 22 August 1791, and ended in 1804 with the former colony's independence. It involved blacks, mulattoes, French, Spanish, and British participants—with the ex-slave Toussaint Louverture emerging as Haiti's most charismatic hero.

The revolution represented the largest slave uprising since Spartacus' unsuccessful revolt against the Roman Republic nearly 1,900 years earlier and challenged long-held European beliefs about alleged black inferiority and enslaved persons' ability to achieve and maintain their own freedom.

The rebels' organizational capacity and tenacity under pressure inspired stories that shocked and frightened slave owners in the hemisphere.

Before the revolution, sugar production depended on extensive manual labor provided by enslaved Africans under harsh conditions, including the unhealthy climate of the Caribbean, where diseases such as malaria and yellow fever caused high mortality. In 1787 alone, the French imported about 20,000 slaves from Africa into Saint-Domingue, while the British imported about 38,000 slaves total to all of their Caribbean colonies.

The death rate from yellow fever was such that at least 50% of the slaves from Africa died within a year of arriving, so the white planters preferred to work their slaves as hard as possible while providing with them with the barest minimum of food and shelter. They calculated that it was better to get the most work out of their slaves with the lowest expense possible, since they were probably going to die of yellow fever anyway.

As slaves had no legal rights, rape by planters, their unmarried sons, or overseers was a common occurrence on the plantations.

‍In 1800, Napoleon had ownership of Louisiana as part of a broader project to re-establish a French colonial empire in North America. France's failure to put down the revolution in Saint-Domingue (present Haiti), coupled with the prospect of renewed warfare with the United Kingdom, prompted Napoleon to consider selling Louisiana to the United States.

In return for approximately eighteen dollars per square mile, the United States nominally acquired a total of 2,140,000 km2 (530,000,000 acres). However, France only controlled a small fraction of this area, with most of it inhabited by Native Americans; for the majority of the area, what the United States bought was the "preemptive" right to obtain Native American lands by treaty or by conquest, to the exclusion of other colonial powers.

The Louisiana Purchase extended United States sovereignty across the Mississippi River, nearly doubling the nominal size of the country. The purchase included land from fifteen present U.S. states and two Canadian provinces, including the entirety of Arkansas, Missouri, Iowa, Oklahoma, Kansas, and Nebraska, New Orleans and the portions of the present state of Louisiana west of the Mississippi River.