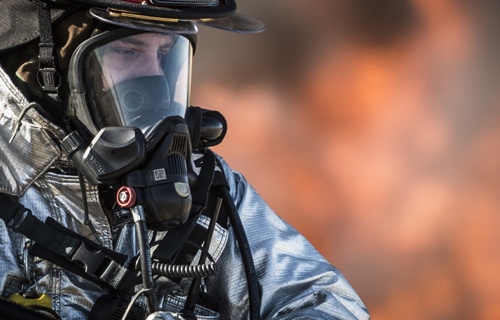 Garrett Augustus Morgan, Sr. was an inventor, businessman & community leader. His most notable inventions were the first modern breathing mask and a 3-position traffic signal. He also became involved in the civic and political advancement of African-Americans. 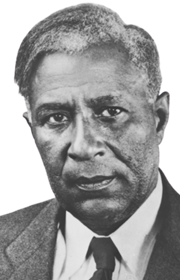 Morgan, born to a freed slave father, and a slave mother, began searching for work at the age of 14, with a sixth-grade education. In 1895, he began repairing sewing machines, which was the impetus for Morgan's interest in how things worked.

Morgan invented a safety hood smoke protection device after seeing firefighters struggling from the smoke they encountered in the line of duty. His device was simple and effective, whereas other devices in use at that time were generally difficult to put on, excessively complex, unreliable, or ineffective. This was effectively the first version of the modern breathing/gas mask. It was patented and awarded a gold medal two years later by the International Association of Fire Chiefs.

To sell his smoke hood around the country he sometimes had to use, especially in the southern states, the tactic of having a hired white actor take credit rather than revealing himself as to its inventor. He himself took the part of "Big Chief" then, a native American perona he invented who demonstrated the device.

By World War I, his breathing device was refined to carry its own air supply, making it a gas mask. (even though the US opted to use a british model instead)

Saved several lives during the tunnel explosion under Lake Erie, when he, together with his brother and other helpers, by using his smoke hood device.

He was not given proper credit for the rescue mission due to racially-biased reporting. Cleveland's newspapers and city officials initially ignored Morgan's act of heroism as the first to rush into the tunnel for the rescue and his key role as the provider of the equipment that made the rescue possible, and it took years for the city to recognize his contributions. Only near the end of his life, his contribution in the rescue was properly credited.

Morgan was exculded from Cleveland City officials request to issue medals to several of the men involved in the rescue. He believed that the omission was racially motivated. Later, in 1917, a group of citizens of Cleveland tried to correct for the omission by presenting him with a diamond-studded gold medal.

After the heroic rescue Morgan's company received order requests from fire departments all over the country. However, the national news contained photographs of him, and officials in a number of southern cities canceled their existing orders when they discovered he was black.

In 1908, he co-founded the Cleveland Association of Colored Men, which later merged with the National Association for the Advancement of Colored People (NAACP).