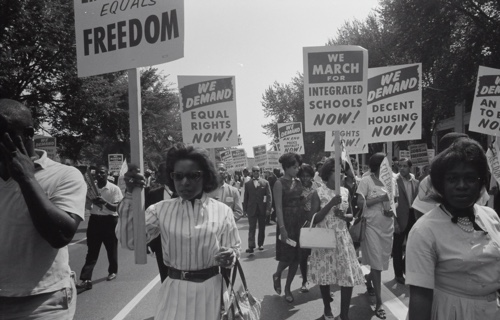 The civil rights movement was a decades-long struggle by African Americans and their allies to end institutionalized racial discrimination, disenfranchisement and segregation in the USA, which also secured new protection for  minorities of all color, sexual orientation & identity.

Many popular representations of the movement are centered on individuals like Rosa Parks and Reverend Dr. Martin Luther King Jr. However, scholars note that the movement was too diverse to be credited to any particular person, organization, or strategy.

The Supreme Court ruled on June 15th 2020 that the language of the Civil Rights Act of 1964, which prohibits sex discrimination, applies to discrimination based on sexual orientation and gender identity, resulting in a big victory for the LGBTQI movement.

Nine months before the more widely known incident, in which Rosa Parks helped spark the 1955 Montgomery bus boycott, on March 2, 1955, Claudette Colvin was arrested at the age of 15 in Montgomery, Alabama, for refusing to give up her seat to a white woman on a crowded, segregated bus. Colvin was one of five plaintiffs in the first federal court case to challenge bus segregation in the city. It is widely accepted that Colvin was not accredited by the civil rights campaigners at the time due to her pregnancy shortly after the incident, with even Rosa Parks saying "If the white press got ahold of that information, they would have [had] a field day. They'd call her a bad girl, and her case wouldn't have a chance."

Although the movement has its origins in the late 19th century,  the movement achieved its largest legislative gains in the mid-1960s after years of direct actions and grassroots protests.

For a short period of time after the American Civil War, African Americans voted and held political office, but they were increasingly deprived of civil rights, often under the so-called Jim Crow laws, and subjected to discrimination and sustained violence by white supremacists in the South. Over the following century, various efforts were made by African Americans to secure their legal and civil rights.

The lynching of Chicago teenager Emmett Till in Mississippi, and the outrage generated by seeing how he had been abused when his mother decided to have an open-casket funeral, galvanized the African-American community nationwide. Forms of protest and/or civil disobedience included boycotts, such as the successful Montgomery bus boycott (1955–56) in Alabama, "sit-ins" such as the Greensboro sit-ins (1960) in North Carolina and successful Nashville sit-ins in Tennessee, mass marches, such as the 1963 Birmingham Children's Crusade and 1965 Selma to Montgomery marches (1965) in Alabama, and a wide range of other nonviolent activities and resistance.

The Civil Rights Act of 1964 explicitly banned all discrimination based on race, color, religion, sex, or national origin in employment practices, ended unequal application of voter registration requirements, and prohibited racial segregation in schools, at the workplace, and in public accommodations. The Voting Rights Act of 1965 restored and protected voting rights for minorities by authorizing federal oversight of registration and elections in areas with historic under-representation of minorities as voters. The Fair Housing Act of 1968 banned discrimination in the sale or rental of housing.