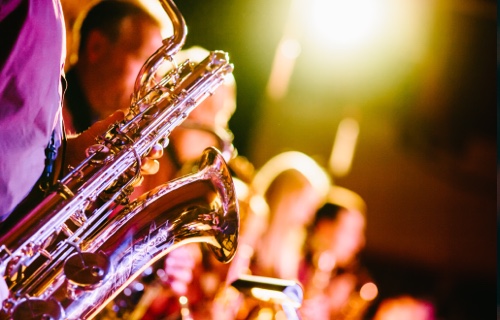 Blues is a music genre and musical form which was created around the 1870s by African-Americans from roots in African musical traditions, work songs, and spirituals. Jazz is a music genre with its roots in blues and ragtime.

The first appearance of the blues is often dated to after the ending of slavery and, later, the development of juke joints. It is associated with the newly acquired freedom of the former slaves.

Blues is a music genre and musical form which incorporated spirituals, work songs, field hollers, shouts, chants, and rhymed simple narrative ballads. The blues form, ubiquitous in jazz, rhythm and blues and rock and roll, is characterized by the call-and-response pattern.

The call-and-response format used both in blues and jazz, can be traced back to the cultural and musical expression of Africa. The origins of the blues are also closely related to the religious music of the Afro-American community, the spirituals.

‍Blue notes (or "worried notes") are also an essential part of the sound. Blues shuffles or walking bass reinforce the trance-like rhythm and form a repetitive effect known as the groove.

Since the 1920s Jazz Age, Jazz has been recognized as a major form of musical expression in traditional and popular music, linked by the common bonds of African-American and European-American musical parentage.

The mid-1950s saw the emergence of hard bop, which introduced influences from rhythm and blues, gospel, and blues, especially in the saxophone and piano playing. Modal jazz developed in the late 1950s, using the mode, or musical scale, as the basis of musical structure and improvisation, as did free jazz, which explored playing without regular meter, beat and formal structures.

Other styles and genres abound in the 2000s, such as Latin and Afro-Cuban jazz.